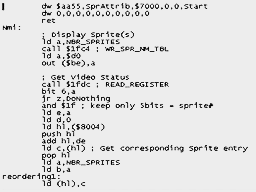 46 Homebrewed games registered.
Converted games to ColecoVision like MSX and Sega SG-1000 is also included.
As they now count as a official released ColecoVision game.

Please report errors so it can be corrected.

30 games is released as a physical cartridge.
0 games Works In Progress or are on the way.
33 games released like a Demo, or as a Download version.
16 games is either Waporware, Protos or not finished yet.